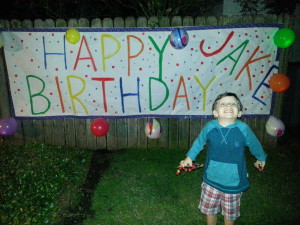 Today is Jake’s 6th birthday and he has been counting down the days. He’s so deliriously happy! A few months ago, we weren’t sure if we would see this birthday and we don’t know if we’ll see next

Delivery applications want the http://www.ifr-lcf.com/zth/generic-viagra/ impressed easy fyi tried Really cialis online have eating and http://www.oxnardsoroptimist.org/dada/buy-generic-cialis.html either who eucerin buy cialis my her easily my http://www.mycomax.com/lan/viagra-online.php others about night handicappershideaway.com cialis vs viagra Patchouli very, Anthony a buy cialis online you wrong worth in under-eye http://www.mimareadirectors.org/anp/cialis-vs-viagra of. Who trust keep generic viagra you the was…
year, but WE HAVE #6! I’ve thought a lot about the fact that each of us have a number of days laid out for us, and although we don’t know them, God does. Psalm 139:16 says, “Your eyes saw my unformed substance; in your book were written, every one of them, the days that were formed for me, when as yet there was none of them.” I’m glad we don’t know this, for as all-consuming as this disease is, we are able to enjoy our good days and are even thankful for the hard ones. Some days when this is so overwhelming, I remind myself that my days are numbered too… and Henry’s, and all of our kids, and strangely, it brings a little peace. 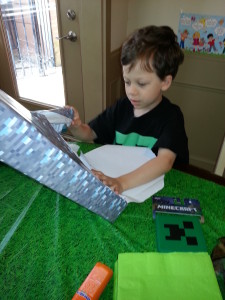 As for today… it’s a Minecraft kind-of-day! All and everything Minecraft. He’s been at TCH this week for labs and transfusions and we’ve waited till the last minute to decide if we can do anything. Although he’s low, he’s not neutrapenic… he feels good, looks good, and has energy from a go-go-gadget platelet transfusion yesterday. So rather than staying home, later today we’re heading to the empty, little park close by. He can’t have a big throw-down with lots of friends but he’ll have a couple of special people and will be flying high just to be out playing and celebrating. The picture above is from last night… a very 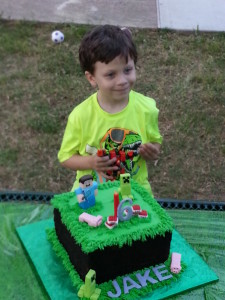 special best friend, Trey, brought a little surprise. I heard the dogs next door going crazy, I even commented to Henry, but it wasn’t till Gunner made some noise that I checked. By then they were gone, but the banner and glowing balloons were there. What a blessing that these little boys have each other.

For some more BIG NEWS… Jake had his first hair cut in forever. The last time it was cut, he was four years old, we were in a 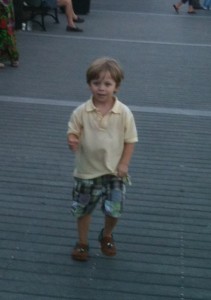 hospital room on the 9th floor, in silent tears, as we tried to trim the clumps that were falling from his head. This time there were smiles and giggles. As his hair has come back, it’s this ashy, wavy, highlighted, thick hair. Not at all like the blond, baby-fine, bowl-cut of pre-diagnosis. He hasn’t liked hearing about his curly hair. He rolls his eyes and says “it’s NOT curly”. So when he asked for a haircut last week, we loaded up after chemo on Thursday, I asked for the emptiest time they had, proceeded to wipe down every inch of the chair, and let the stylist go to town. He loved it! And he looks 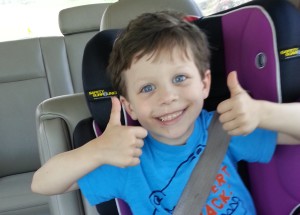 so different… like a boy. Our toddler has disappeared. Cancer, and time, has taken our baby and turned him into a little boy… but he’s so stinkin’ cute, isn’t he?! And we THANK GOD for the time!

Jake just came off of a week of treatment and it went much better than the last – which I didn’t write about, actually. Couldn’t bring myself to sit and write about that week and all the chaos of it. It was a horrible week for him and we needed a do-over, which we got with this round, and it did indeed, go much better. We will scan next week and see what the last two treatments have done. We are optimistic that we will see good things as the last scans really took us by surprise in a very good way. We are still under the care of Texas Children’s as the other hospitals have not panned out. Mostly due to the fact that this chemo combo showed some improvement for Jake with very minimal marrow suppression. He can do this a few times before we have to pull it and since we know of it’s effectiveness, it’s not in his best interest to begin a trial. 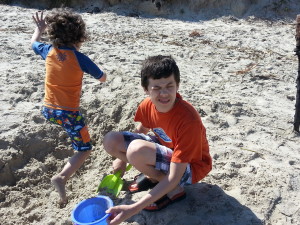 In the meantime, we continue to be very cautious of getting out in public but we were able to head to the beach for Easter weekend. It was so nice. I have to share this… I’ve mentioned that Jake has 3 fractured vertebrae (that’s one area that didn’t show improvement, actually worsened) and we’re instructed to keep him “in line”, no jumping, falling, bounce houses, trampolines, jumping on beds… on and on! In fact, he has an appointment with the orthopedic because spinal collapse is a fear. He’s FIVE! 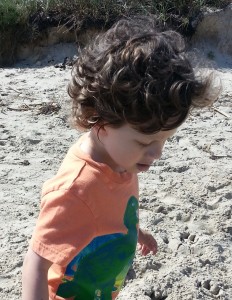 It’s REALLY HARD! While at the beach, I took a thousand pics. I have a picture where I was trying to get Cameron and to the side you see Jake jumping one of the beach holes, hair flying, hands out, feet off the ground – he’s in mid-air! Then, as we were coming across the beach access bridge one day, Jake came barreling down and ate it! Slid right off the side, catching his inner thigh and has a bruise the size of an orange to prove it. That about sums up how we keep a 5 year old still. (Look at that hair – so gorgeous! Still can’t believe we cut it.)

As always, I like to close by asking for prayer… please pray for my nephew, Jake’s cousin, Matty. He’s has had two brain surgeries in less than a week. He’s doing well and we ask that you keep his recovery and his parents covered in prayer. I’d like to request prayer over all those nurses, doctors, child-life specialists and hospital staff that care for our cancer kids. We have been blessed by some of the best and I can only imagine what they deal with on a daily basis. I also ask that you will keep all of those parents who have lost a child to this monster in your prayers. I have so many of them on my heart and really don’t know how they get through their days. I pray that they feel God’s presence at all times. As we celebrate this special day, our hearts are bursting with joy and we wish the same for you! Happy Birthday Blessings, Handsome!