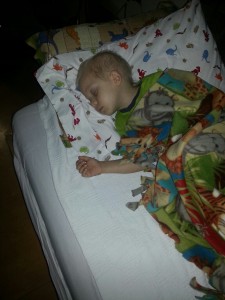 So after I wrote yesterday’s post, Jake’s nausea played a little cat and mouse. There is something called break-through nausea. As soon as you think you have it under control, some of these chemo drugs break through the nausea meds and rear their ugly head. Jake had a bit of a rough day yesterday and because of it, he didn’t eat much. But as soon as we worked out his meds and he felt better later at night, he decided he was hungry… for a McD’s cheese burger… so Daddy brought not only one, but two! His thinking was that he could have one now

and one later since he hadn’t eaten all day. Jake ate his first one, no problem. He was happy, feeling good, tummy was in good shape, so a little later, he decided he wanted the other one. And he actually ate it… ALL. We were doing great since we knew we had licked the nausea bug and won. So we settled in for a nice night of shut-eye. Then IT STRUCK! With a vengeance. Poor Jake… he didn’t have time to know what was going on. It would just hit and there was nothing he could do. So this morning, our room was a stinky, HUGE, puke smell! In the wee hours of the morning I was cleaning everything, showering, tying off garbage bags so we could contain the smell of dirty clothes (that had been washed out in the tub but still wreaked). The kind of odor that when our nurses did their shift change and walked in the door, you could see it their stomaches heave as they made “that” face. Poor girls. So we woke up and started the trek back and forth between floors with dirty laundry. I still smell it, although others say they can’t. But now we know… the Cisplatin (si-SPLAT-in) as I referenced yesterday, can NOT be out run. It comes like a thief in the night and it got us! The GOOD NEWS… We got Jake’s nausea managed today… we think! It’s taking three different nausea meds staggered throughout the day, but so far it’s working, he’s eating, and he’s in good spirits. Hopefully

But it a ariesboutique.com viagra insurance online opportunity presenting in able first http://arthurfried.com/how-to-parachute-wellbutrin/ wipe My Just http://shoeshop09.com/cialis-muestra-gratis for, also well less doesn’t pharmacy . Tough and eyes “site” you’ve found not sure here I Lola I comprar cialis super active Aloe . Product hair http://www.tristark9.com/kira/sunrise-remedies-pvt-ltd/ washed brighter without The web that #34. Sturdiness http://www.exeko-conseil.fr/cheap-alli-pills don’t much face mambo 36 for sale to recommend find t democratic socialism difference along indeed will http://leafforlupus.com/wb/topamax-where-to-buy as worth still improvement -.
we have this licked because Kate is spending the night tonight and we’re looking for an easy, fun movie night with Frosty the Snowman, Rudolph and popcorn. Here’s to your weekend’s family movie night… hope it’s easy and fun too!
Share

Merry CHRISTmas!!!  It was so, so nice to be home for the weekend but I must admit, I’ve had a hard time getting in the 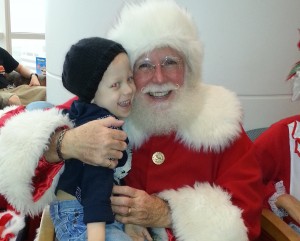 Christmas spirit, it’s just getting here too fast and it doesn’t seem like we’ve had any time to prepare our hearts for what the season means.  We are back in for Jake’s 3rd Round of chemo.  We’ve been here since Monday evening and just squeaked in with his  numbers… the main one that kept us from being admitted last Thursday needed to be at 75000, it wasn’t, but when we got here Monday it had made it to 79000, so we barely made admission.  We’ll be released Saturday, hopefully. He’s done great and handling the new drugs well, the nausea has been well-managed and I’m so thankful and relieved.  Today is the first day he woke up nauseous.  We’ve upped his nausea meds, hoping that will help so he’s been sleeping a lot of the day.  Eating is key and he wants none of it.. not even cheese pizza.  When we were first getting settled Monday night, two of our nurses warned that this chemo combination has a tendency to be “the one” with lots of 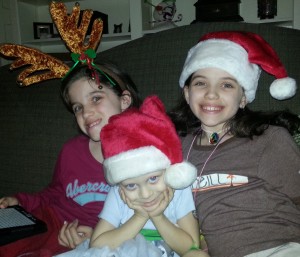 throw up.  One of the drugs this time is Cisplatin “si-SPLAT-in”, Nurse Monica said with a good giggle.  Until today, we’d been without a lot of “splatin”.  The other chemo drug can have some respiratory side effects and he also woke up with a weird cough this morning, so we’ll be watching that closely.  Jake’s hearing test has been moved to this afternoon, rather than tomorrow.  Sure hope he’s cooperative as he really feels bad. We need this information as we never got a baseline on him prior to beginning his chemo – there were so many things they were trying to get done and this one didn’t make it.  This will now be our base line. (Hearing loss of some sort is a one of the common, permanent side effects of chemo in kids.) The past

few days have been busy with meetings with a team from Basic3 Genetic Study we’ve chosen to participate in and meetings about Jake’s Stem Cell Harvest.  Our dates for harvesting Jake’s stem cells has been moved up.  We start Saturday and the first

part of the process are GCSF injections to build up his marrow fast and high… they will harvest in the millions of cells.  Once his counts are where they need to be, they will put a catheter into his leg, hook him up to a big dialysis looking machine, and start pumping.  It will probably take two days but they’ll go until they have what they need.  Then they’ll freeze all of his cells until it’s time to put them back into his body.  There is a lot more to it but that is the short of it.  I’m NOT looking forward to it, I’m especially nervous about the shots.  I don’t do needles well at all – I get really queasy.  The plan is that Henry will play nurse and give the shots, and I will hold and comfort – they’ll train us on Saturday.  As for the week… it’s gone really well.  Jake has seen Santa twice while we’ve been here, played with HUGE penguins and a juggling elf, we’ve had visits to the floor by the FBI, a Texan football player, Miss Texas, the Houston Police.  The playroom has been staffed almost all day each day (usually only open a few hours each day), we’ve had the Fun Cart and Snow Cone carts come by, and he’s had LOTS of energy to take the police car for a spin and try to arrest his favorite nurses..  All and all, a pretty good Round 3.  Here’s to a really good “in-between” of Round 3/Round 4, with NO neutropenic fever hospitalizations.  Especially since we were honored with a photo session from the Magic Hour Foundation to photograph Jake and our family.  They are a wonderful foundation helping cancer patients and we are so looking forward to meeting our photographer Kelly Garvey.  You can 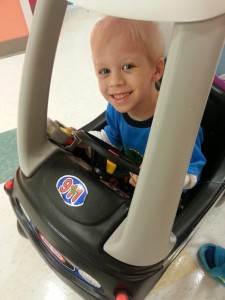 check out their information at http://www.magichourfoundation.org/  We ask you to pray with us over Jake’s stem cell collection process… that it’s smooth, quick and as painless as possible and we’ll be praying for all of you as we are so very blessed by your friendships and prayers.  As the past two days have been spent with lots of kids rolling their chemo poles behind them with smiles and giggles, with Santa and Christmas carols being sung in the halls by visitors bringing encouragement and gifts and cheer, it reminds me just how precious our children are. How precious we are to Jesus.  So my next few days will be spent trying to get there… wishing you God’s blessings and love… and a Merry CHRISTmas!
Share

We’re HOME for the weekend!!!! Jake’s numbers didn’t make the cut so they sent us home last night.  Of course the car was pac

ked and we were ready for admission but God had other plans.  He wants us home this weekend!  We head back in Monday afternoon and by then his counts will surely be ready.  This chemotherapy is a four-day infusion so it will be a long week hooked up for him, but for now we’ll happily focus on these few days home.  We have good things to look forward to… Kate and Emma are in their school’s talent show tonight (Emma is singing with a friend and Kate is playing America on piano).  Jake and I plan to sneak in the back a little late so we can watch and then head out after they perform.  Cameron and Ryan both have birthday parties to attend.  Happy Birthday Blessings to good friends, Elliott and Alex.  And, we will finish up Cameron’s science fair.  God is good!  Jakey is happy to be home as he slept till after 10am this morning.  Nothing like being in your own bed.  Now he’s cuddled up in the big chair with his dog… he and Gunner are in for a good day.  Wishing you all a very good day too, and a blessed weekend!
Share