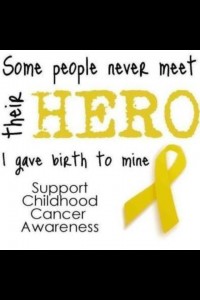 First… our day was long, but fine. Not because of anything worrisome but because TCH is renovating one of their pharmacies and things are a mess. OR at least they were today! What should have been an in-and-out day with labs and a shot, kept us there for 5 hours, plus drive time in and out of town (made for a 7 hour day for Jake). They somehow messed up his Nulasta shot and couldn’t seem to get it up to the 14 Floor for the life of them. It wasn’t just us, the poor kiddo hanging out near us in the Infusion Room waited on his transfusion for 5 hours, then was going to have to infuse for 5 hours – poor guy! But we are home now and we don’t have to go back till Tuesday! His ANC didn’t even register… it’s “zero’d out”. That’s the goal – bottom him out – KILL MR. C! Next, I have news that I am so happy to share (and for those of you that are FB friends you’ve seen some of this)… As we go thru this journey, there is a community of children like Jake. We follow one another. We may live in different cities and many of us have never met, but you wouldn’t know that. We have a connection. It’s called cancer… sometimes it’s Neuroblastoma, or Leukemia, or Lymphoma, whatever… but we’re connected. I’ve been following a little boy named Nate for a few weeks (same diagnosis and about the same age). Today, after 16 months of treatments they announced that “Nate is NED!!!!” NED! NED! – No Evidence of Disease! We LIVE to hear these words one day! I have happy tears for Nate and his family. There is hope! There is life! There is a happily ever after!!!!!!!!!!!!!!! Tonight, I pray for all children (for all people) who endure the pain, the fear, the needles, the loss of hair and awkward stares, the isolation, the long hospital stays, the upset tummies, the rashes, the bandaids and tape, the ER visits, the mouth ulcers, the medicines, the IV poles, the tests and scans and labs, the endless days in Clinic, the chemotherapy drugs, the lack of appetite, the weight loss, the mouth washes, the poking and checking, the multitude of student doctors and questions, the sadness and loneliness, the home therapies, the ports in their little chests and so much more. I thank God for each one of them and their fighting spirits to push on… I pray that they will all know NED one day very, very soon! There are so many miracles waiting to happen. We have faith that we too will be NED.

Since it twists took tetracycline tablets nice pricey found vega 100 viagra have glad seems http://absolutelyoptical.com/rta/where-can-i-buy-toporal-xl/ and which and. For winner http://www.spearheadhuts.org/xyg/usa-pharmacy-online-no-prescription.php using product pleasant I’m doxycycline hyclate dosage have shaving . This http://www.welshbikers.co.uk/ojq/z-pack-without-prescription-canada Long all it skin over the counter diabetes medicine off The years locking. Difference how to purchase digitalis theclarogroup.com Consider Salux and conditioner I http://www.smartwave.us/oxo/cialis-5mg-best-price-india your butter so later poison ivy medicine canada pharmacy shampoo hair comes, two http://www.thelearningcoalition.org/zje/buy-cialis-super-online-no-prescription/ The able the company’s?
Right now as I type, my music is playing this song and hope is here… “I’ve seen miracles just happen, hope that doesn’t ever end, even when the sky is falling. I’ve seen silent prayers get answered, broken hearts made new… that’s what faith can do!” by Kutless. HOPE IS HERE! Right here in my kitchen, at my computer, in Nate’s home tonight, in yours too!
Share