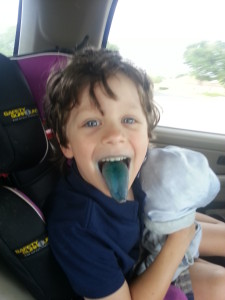 ~~"Trust in the Lord with all your heart; do not depend on your own understanding.
Seek His will in all you do, and He will show you which path to take." -Proverbs 3:5-6

This week we learned more of the plan ahead with more twists and turns as NY wants Jake to undergo HD-ICE with rescue prior to the trial. This will be a harsh 3-4 weeks of awful sickness and pain, and this isn't even the trial! It's stirred so many emotions and my mind is circling to find peace in this. There is a verse in a song that says… "I'm done fighting, I'm finally letting go". I have a necklace that says, "Let GO and Let God" and everyday at noon the Lord's Prayer comes on KSBJ reminding me, "Your will be done", yet those are things I have struggled with since the beginning of this journey and if I'm completely honest, I have not completely let go. I want to but I can't. He's my son. God gave him to us and I'm so afraid that God's will is different from mine. Many people have told me that I must find peace with this and give him to God and in so many ways I have handed him over. Really! But those friends, sweet and loving, have not walked this road. They have not begged for their child's life and seen him suffer to this level. I'm so overwhelmed and tortured at the lack of options for Jake and what we are about to do him. I'm sad that this is the life that has been chosen for him at this time. I'm tired and wearing thin.

The ICE treatment plan that NY is requiring is different than the ICE that TCH offers (TCH's plan is a much lesser dosage, therefore less toxic). I'm going to give a lot of information that will hopefully come full circle… most of the hospitals around the country operate under COG criteria (Children's Oncology Group). But there are a few that don't, and Sloan Kettering is one of them. They operate under their own protocols that are very different from COG hospitals. A COG hospital must comply with thier protocols without deviation per FDA and NCI (National Cancer Institute) regulations. Jake doesn't qualify for TCH's ICE due to his platelets. Even though it's a lesser dosage, the rules are set and they won't administer to him. While we have bent the rules on the current chemo combo that Jake is taking, it isn't a written COG protocol, it's similar to a compassionate use of treatment without the legalities and permissions of true "Compassionate Use". COG protocols are not bent… again, they are legally approved treatments. The way Sloan's ICE protocol is written, Jake meets the criteria WITH a rescue. This treatment is categorized as "salvage therapy" (nice term, eh?) for refractory/relapse patients. Because most of the kids needing this treatment at their institution have chemo induced marrow damage, they allow platelet criteria to be quite a bit lower. Now as I stated above, the the key component is WITH RESCUE. If you remember, we harvested Jake's stem cells in Dec 2012. This treatment requires that his own cells be re-introduced in hopes to help his marrow recover after the ICE. The scary thing is that we attempted this after the MIBG trial at Cook's Childrens Hospital and didn't feel that is was much of a benefit. Now here's the kink… Sloan Kettering has requested our home hospital administer their (Sloan's) ICE regimen so that Jake can be here and keep travel at a minimum before we tackle the trial in NY. It would eliminate a whole month (out of months) of treatment out of state. This is great news for us, EXCEPT… TCH doesn't offer this… remember COG hospital. COG hospitals don't do non-COG treatments. They have been asked in the past when other families were trying to head to Sloan for this same thing and have had to decline. However, they are reconsidering due to the repeat requests. The bigger kink… TCH can't just administer Sloan's ICE. They will have to write a protocol that mirrors Sloan's and that means lots of red tape, meetings, legalities, FDA approval, TIME, yada yada. It's quite involved but Doc H feels that there is a good chance that it may be a go because it will help more kids get to the trials they need. (Cool thing… this may come about because of Jake's need but it will help all those kids that come behind him). Something we learned in Chicago is that there is a growing community of kids like Jake that have never hit NED. Their marrow is devastated, their options are few, yet they are "healthy" cancer kids in need of treatment. They're being left behind because research isn't keeping up and they're left for the cancer to take them over when they currently have excellent quality of life.

This week we also learned what Sloan's ICE treatment means and it's WICKED. Jake will be so sick. For so long. He'll have horrible mouth sores, he'll be on lipids and TPN, he'll loose his hair again, fever, pain, morphine drip, nausea, possible infections, lots of lines, and be on the BMT floor… for weeks. But if we can do this here, this is less that we do in NY. I think I've been in denial of what this all meant and it's hitting me. We've had a great summer and he's felt so good. He's at a really good place and in our minds, we felt we were heading to NY as healthy as possible. In reality, we will head there after he's been knocked to the ground.  We knew the 3F8 part of the trial was difficult but this adds a whole new level of terror.

I haven't even begun to tell you about the trial and I'll leave those details for another post but it is 3F8 with NK Donor Cells and Chemo. The NK cells this time are NOT his own. They are donor cells. Henry and Meghan will be tested first. These cells are different in the sense that they have to be familial but most UNLIKE his own. Please pray that one of them works, or is NOT a close match, actually. If they don't work, the other siblings will be tested. Surely we have enough kids that ONE will fill the need.

As for Jake, he finished his week of chemo and although there was a lot of nausea, h

e came out like a champ! He even got a haircut this week! It was the curls again that pushed him over the edge. It drives him nuts when people comment that they love his curls (cuz boys don't have curls, ya know?!) On one hand it makes me sad to know that he's going to loose his hair again and on the other, I love kissing his bald head. And something that I've come to realize is that when he was bald people kept their distance a little more. Not that we want people to steer clear but strangers don't tend to touch a bald kid. The hair makes him look well. And although he is doing better than he has in so long, he isn't well and we are always on gaurd. Last week, in the hospital elevator, a lady started running her fingers through his hair, then she pulled a chip out of her Lays bag to share with him. You can imagine me standing there crawling the walls to get out. That doesn't happen with bald kids! He kindly took a step back and said "No thanks."

So this is where we are… we have some new information but not much. Each day brings something new but we find ourselves in limbo once again. We know where we are heading eventually, but we're waiting for the road map. In the beginning of Jake's diagnosis we were told that, "the best you can do is take one day at a time"… we had no idea of the truth in that statement.

And so we brace ourselves for t 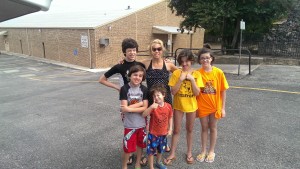 he journey ahead. We look to you to stand in and pray for us as we are finding it hard right now to wrap our minds around all of this. Even in all of these unknowns we have HOPE. We wouldn't do this otherwise. As always, I'd love to ask you to pray for some friends… Patrick and Prestun are Neuroblastoma fighters and Raelyn fights Rhabdomyosarcoma. They are in need of your prayers right now in a BIG way. And don't forget… September is Childhood Cancer Awareness Month. Please paint YOUR world GOLD for Jake and all of these kids. They need YOU! And we appreciate you so much!!!