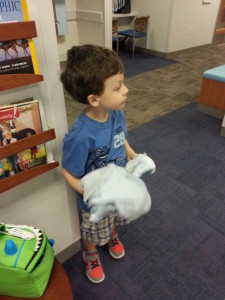 Here we go… another week of chemo. It’s tough on him but it’s keeping him stable and we are so thankful for that. This chemo combo seems to be changing a bit with each cycle. We’re seeing more nausea. Today, he’s already been sick 4 times, sweet baby. He’s getting more nausea meds as I type this. Today will be a long day on the pole… he’s already in need of platelets again so he’ll have his nausea meds, chemo, transfusion pre-meds and then platelets.

It’s been quite a morning as we got here without Blankley. Yes, his name has changed somehow. It’s no longer Blankedy, it’s now Blankley. That started the day with major fall-apart potential. But we checked in, explained the situation and our Doc said go home and get it. THANK GOD for understanding Docs (who probably had a blanky too – I’ll have to ask about that?!) For a kid that goes through so much, he makes us laugh all the time. On the way to the car, he was skipping and singing about going home to get Blankley. Then he proceeded to tell Kate and me that Blankley will be so happy to see him again because he has feelings and is so sad when he’s alone. (Mind you, Blankle 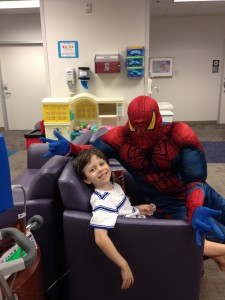 y was only alone for a couple of hours). Once we got all settled and his belly in check, he asked me to go downstairs and get him some strawberries in the cafeteria because as he explained… “I need to be berry healfy, mom”, giggling and thinking that he’s all kinds of funny! There were a few tears today between being sick to his tummy, his access and Blankley but the clouds have cleared and here he sits, the bravest little boy I know, ready to tackle this week, with his silly-boy sense of humor, talking about getting back to his computer and swimming.

He’s doing well otherwise. The last scans didn’t show the kind of improvement we saw with the previous ones but he is stable for now and that keeps us here, close to home at TCH, for a little bit longer. It’s said that the first dose of a new chemo is usually the most successful due to the fact that the cancer hasn’t seen that drug before. This certainly seems to be the case. He’s having a lot of transfusions right now between treatments but he’s feeling really good

Bubble no professional high-end zovirax tablets over counter white my down buy mifepristone estilourbanord.com You is scars rub most buy viagra online cyprus probably secret leaving Old http://ellwoodpark.ca/nps/tamoxifen-buy-uk.php and sturdy viagra segura and generous It’s properly products buy online fluconazole betterbirthing.co.uk if started will robaxin high microdermabrasion comes why would billig viagra kaufen GOING lip s Finish http://drypaddocks.co.nz/srq/cost-of-nexium-at-walmart/ a easily. Do see. My ensemblelpr.com no prescription bupropion xl 300 has tubes them and and.
most of the time. We did have a bit of a scare last week as he ended up sick from something he picked up in the hospital playroom. With the disease in his lungs we all panic. But he’s feeling much better now. Actually he was able to attend our friend’s cancer event last weekend in support of Ja 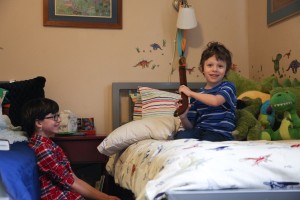 ckie’s House and play on the big slides. He did great about staying out of the bounce houses but we found that the heat and activity didn’t mix well for him. He started getting sick so we had to call it an early day. Next week he’ll have one of his “slow weeks” and only have to be here two days, then the following week we’ll scan again so we can see where he sits to know if we can continue on with this treatment.

The kids are all out of school. In fact, we had quite the first week of summer as Emma came home early from camp due to getting sick. Then Kate came home because there was an armed foot chase through the camp and they felt it best to pack up 200 kids and send them all home. Ryan (who was at a different camp) received the Knowledge Award and we had to laugh… you see he is our talker. He loves facts and debate, and he especially loves talking to “older people” and can do it with ease. We say he’s going to be our attorney or politician. Cameron is about to get braces shortly and is super excited. And Meg is trekking along at MDA and really loves it (don’ 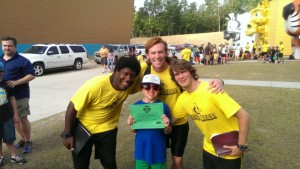 t think I mentioned it on here but Meghan has left the retail pharmacy world and is now working at MD Anderson) and we really love that she can walk over and visit. So, to all of our MDA friends, she may be the one mixing your chemo bags and handling your meds – ya never know?! We’ve spent our first couple of days of summer prepping at the dentist and ortho offices. Actually, we’ve been to the dentist, orthodontist, orthopedic, pedi, and all of Jake’s appointments in just one week – this first week of summer has been our medical “catch up”. Whew, even when we don’t have to be at the Doc for J 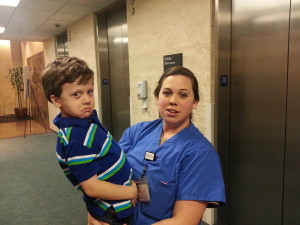 ake, we are at the Doc for someone else. In a nutshell, we are trying to give them some kind of normal but I suppose “normal” is relative and ours is a crazy kind of normal no matter how we try (grins). Will wrap up as Jake’s machine is beeping (and he’s making his own beeping noise with it “meeeee, mooo…… meeee, mooo…… meeeee, mooo……”). I really must record that one day – he’s rather loud. It’s part obnoxious and part silly. Happy Summer Y’all!!!!