After months and months of tears and setbacks… we walked out of scan week with some good news. Scans are showing improvement in all areas except one. Jake has three vertebral compression fractures and while two of them were stable, one of those shows progression. The radiology reports from all of his images are back and state, “there is a dramatic improvement in number and distribution of multiple pulmonary nodules… and the number of lesions detectable within the liver has decreased.”  This means the spots in his lungs and liver are less. There is much more to the reports but those were of the most concern after his last scans. His boney disease also showed areas of improvement and appears to be mostly stable. Praise Jesus!!!!!!!! It’s not over, till it’s over! And this little man is not giving in! We don’t know what his bone marrow shows since we didn’t biopsy this round – we know it’s there and measurable but it isn’t our top priority at this time. There is still a lot of disease but to know that we put a dent in it after months of progression is encouraging. And what’s more… the areas on the last scans that appeared to be improved WERE indeed IMPROVED. There was question as to the validity of those areas because of how much disease progression showed up last time. There we 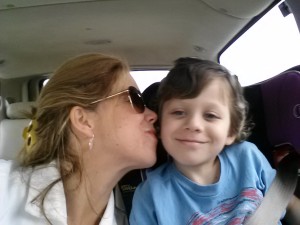 re actually two areas that appeared better 6 weeks ago, his right leg and the skull. We were told that it could be that this is where the T-cells latched on and attacked (they were measurable, after all), or it could be that there is only so much contrast that is injected for these scans and with all of his disease, there wasn’t enough dye to uptake in those areas. Well, guess what… it wasn’t an uptake issue. The scans still show those areas as decreased disease. So, take that!  The T-cells were there! They WERE working! What we think, is that Jake has too much disease to b 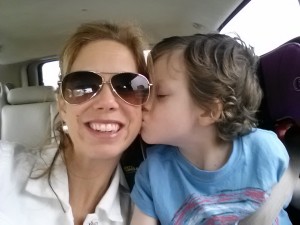 e ready for T-cell therapy and this may be more of a 14.18, residual disease, type treatment (now take this with a grain of salt, this study is way too early to have any official findings – this is only speculation at this point). Anyway, it’s been a long but good two days! I will say, it started a little sketchy yesterday when we learned that his platelets dropped again and we had to close the place down after scans with a transfusion but we did get to catch up with friends and that’s always a nice diversion f 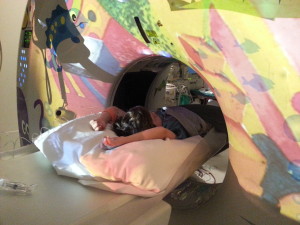 or both of us. Jake and Charlie were able to play on their pads together and we mommies were able to catch up. I definitely enjoyed the time to visit. Please keep a few little friends that we were able to run into in your prayers…. Nathan, Charlie and Wesley, all Neuroblastoma fighters. Radiology was full of our NB warriors this week. And I have to share, it took us over 2 hours to get a 50 minute MIBG done today. I won’t go into all the details but there will be a letter heading out as there is a radiology nurse that really should consider another line of work. One of our nurses, Jason, was kind and helpful, but the other, not so much! So for now, we start another round of this same regimen on Monday. It’s five days worth of chemo, which by the way, this chemo combo is not used as upfront therapy because it only has a 30% success rate for most kids. Wouldn’t ya know, something we try as a last resort works for Jake. It brings me to something else going on in cancer research. Dr. Shol 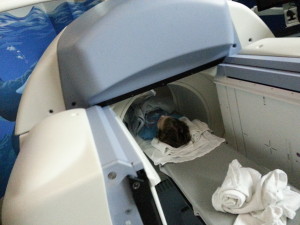 ler in Michigan has a Guided Therapy Gene Analysis Platform study for relapse and refractory neuroblastoma patients where they determine a tumor’s molecular makeup to help predict which drugs may be beneficial for a patients cancer so they don’t give these toxic chemotherapy drugs just because it’s protocol. They offer personalized treatment based on that person’s tumor expression. Talk about the wave of the future right there! Oh, how I wish we had that 18 months ago! Jake’s platelets might be in a different place if we had known what drugs work and don’t work on his cancer. We could have chosen medications specific to his genomic make-up. The same neuroblastoma cancer can have different gene expression profiles and what works for one kid, may not work on another. This is why we need these trials. We need to get the word out. There are researchers out there making huge strides but they are blocked by something as simple as funding. Jake isn’t in a place for this to be much benefit to him anymore… he’s had most of the drugs out there and his marrow is shot. BUT there are kids out there in the beginning stages of their treatment and things like this could be their miracle. HELP us fund these trials!  Spread the word… PL

EASE SHARE Jake’s story and others like him so people know! And THANK YOU!!!!!  So many of you are doing that. You walk this road with us, allowing us to lean on you and share our daily struggles, and for that we are forever grateful. Today is small in the scheme of Jake’s journey but it sure feels like a BIG thing. We are blessed by your constant prayers and we draw strength from your support on those days when we feel so discouraged. Better yet, we are thrilled to share Jake’s celebrations of days like these. They are far and few between but when they come, we hold on and ride the wave! God bless you for jumping in with us! Today as we were riding home, the story of Jesus and Peter popped into my head, reminding me to trust… “Lord, if it’s you,” Peter replied, “tell me to come to you on the water.”  “Come,” he said. Matthew 14:28-29 Peter went out to Jesus but fear set in and as he began to sink, he cried out, “Lord save me!” Jesus reached out his hand and saved him. We, like Peter, in our doubt and fear must call out to Him. He will save! Keep praying and singing… “I will call upon your name, keep my eyes above the waves, my soul will rest in your embrace, I am yours, you are mine.” I just LOVE this song… Oceans (Where Feet May Fail) by Hillsong!  http://www.youtube.com/watch?v=ga3DmPRPAQQ Turn it up!
Share